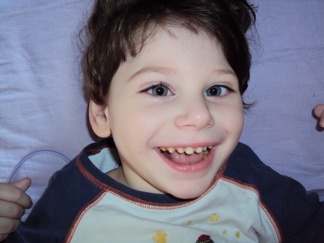 Alex was born on the 16th February 2005. He was 13 days overdue. He unfortunately suffered a major brain injury over the hours prior to his birth after the placenta failing to do its job properly.

It has since been found that this was due to ‘failure to treat’ by our midwife as I had called earlier that day as I had no movements since the night before. She did check me with the sonic aide at her home, but there was no CTG or scan which would’ve confirmed the blood flow was no good and an emergency C-section would’ve been done. I was reassured by the heartbeat on the sonic aide so went home to await the scheduled induction the next morning. I however went into labour in the middle of the night and delivered him 1hr 40mins after waking up in full labour at the Birthing Unit.

My son now 5, is unable to talk, walk, eat orally. He is intellectually impaired, visually impaired, has epilepsy and suffers extreme weight and sensory issues which prevent him from enjoying anything that other children his age should. I could go on but this brief description should give you an idea of what the injury has left.

All this could’ve been avoided by a simple scan and CTG. I wasn’t offered one at my due date or after the first week overdue to make sure all was ok. I agreed to have the late induction as I wanted to go into labour naturally on the assurance that the baby was fine. And all that was used to determine his apparent health was the sonic aide. I have since learned that a brain injury doesn’t always alter the heart beat. So there would be no way of knowing what was going on in there without the scan and CTG. I would expect a midwife to have that knowledge.

It was reported that Alex was growth restricted as well which was the opinion of a pediatrician who reported for ACC. My tummy was never measured throughout the pregnancy either. So how would it be known if he was growing properly or not. My son was 7.1lbs at 13 days overdue. Which compared to the others was small.

Our lives are now ruled by his needs and he has been ripped off from living any kind of normal or even semi-normal life. He will have a life time of surgeries, therapy and being forced into equipment to try and maintain his body to prevent further pain and suffering. All because a scan and CTG wasn’t done.

As much as I find myself sugar coating life with a severely disabled child the reality is that it sucks badly! I love my son more than anything and even after 5 years still feel as in love with him as much as I did with all 3 of my newborns, but I have a deep sadness and resentment for his disability. Its not about acceptance because I do accept it, and our days are filled with love and happiness but the disability and high level of needs just doesn’t ease off. Its like being stuck on a bullet train, it slows down occasionally but never ever stops and will speed up without any notice, leaving you constantly exhausted and drained. All because of no scan and CTG!