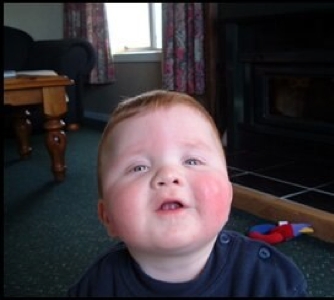 In the beginning of 2003 I left my ex-husband and soon after meet my new husband Jason. I discovered I was pregnant in April. It was a shock to us, as Jason has very low sperm count.

We chose a midwife. I had 4 other children to my ex so informed the midwife that I had placental problems in the eighth month of all pregnancies and would go into labour early. This was never noted on my file.

Over the next few weeks I began to have pain but when I brought this up the midwife dismissed my concerns. I knew the pain wasn’t normal. It got worse and was always there. By the time I was 20 weeks I couldn’t walk too far and the pain was getting worse. Eventually i couldn’t walk to the mailbox, stand at the bench and prepare dinner or sit, stand or lie down for very long. My stomach was so hard it was like concrete.

The midwife never wrote any of this down. She said it was “braxton hicks” and was nothing. By this time I had to get Jason to turn me in bed the pain was so bad. I would scream as he turned me. Again she said it was nothing.

I began to bleed. She got a scan and said there was nothing wrong. I knew something was wrong.

At 35 weeks Jason had had enough and took me to hospital. The doctor in the ER took blood and said there was nothing to be concerned about and admitted me for observation. I had a different midwife in the hospital. She just said i wasn’t in labour but would monitor me. She put me in a bath and turned on the spa. I had to get Jason to lift me out the pain was so intense.

Jason asked for a second opinion. The doctor came and told us “you’re not in labour, we’ll just wait and see what happens.” Things didn’t improve. They got worse.

Jason asked for another doctor. We waited and waited. He asked a number of times where the 3rd doctor was. Then he got angry and demanded a doctor immediately.

Eventually the doctor came. I have never seen a doctors face with such a horrified look and his colour drained as he looked at me. He screamed at the midwife to get theatre ready – “placental abruption” and “move” were his words. She just stood there and he yelled at her again. All the staff came into my room to see what was wrong.

The midwife was ordered out and I have never seen people move so fast. When we got to theatre the doctor asked the theatre nurse if the theatre was ready she said, “no” and he said, “too bad, I don’t have time to wait”.

Jason was gowned up to come in but no-one came for him. He just sat and waited.

The doctor came out and asked who he wanted them to save – things were not good.

They delivered Quinntin at 11:42pm, November 10th 2003. He needed to be revived. It took them 4 minutes to get him breathing and they rushed him to the neo unit.

Jason was told he was very sick and wasn’t expected to survive the night. They continued to work on me. There was a litre of blood in clot form behind my placenta -this is what ripped it away from my uterus. I had been bleeding behind my placenta for some time. This was my pain.

The next morning they told my my baby was doing well. They were very surprised to see him although he was very sick still. We both were. I needed blood transfusions and antibiotics. While in the hospital Quinntin aspirated and stopped breathing. A nurse told me this was normal.

Quinntins motor skills didn’t develop normally and he kept aspirating. I kept telling my concerns to pediatrics but my concerns were brushed aside. He had gone without oxygen for a long time and I believed, and still do, these problems are a direct result of the lack of oxygen and his traumatic birth. I was told i was a neurotic mother, there was nothing wrong with my baby, I was wasting the doctors time.

However on the morning of September 22nd 2004 At 6:30am I gave Quinntin his breakfast before his Daddy went to work at 7:10. I sat him up with pillows and went to make our beds. He was sitting up. At 7:16 I heard a gurgling sound. I raced down to the lounge. Quinntin was lying on his back struggling for breath. By 7:17 I made the call to 111.

I couldn’t get air into his lungs. The emergency operator said I wasn’t doing mouth to mouth properly. But I was. I know I was. I couldn’t get air into his lungs because they were full of fluid. I also told her there was NO pulse and asked if I should do CPR. She replied NO!. I told her my address over and over. Why she chose to trace my address through Telecom I will never know. The ambulance was told my address 6 minutes into my call at 7:23.

I watched him die in my arms just after that. At 7:28am the ambulance arrived. They tried to resuscitate him. Quinntin died from “asphyxiation due to aspiration of stomach contents.”

From birth he would aspirate fluid from his stomach. It would go into his lungs and he would struggle for breath. This time it took his life. It takes the ambulance 5 minutes to get to my house, yet because they had to wait for my address it took them 11 minutes. It’s more than midwives that need to be looked at.

The wonderful doctor who gave us 10 months and 12 days left our hospital because he wasn’t prepared to put mothers or babies lives at risk like he had been asked to do. He stated this fact on national television. He laid a complaint with the Health and Disability Commission. The midwife who was there on the night was stood down while I was there.

We laid our own complaint but were told the doctors and midwives did their best at the time and would not be accountable in any way, although they could have done better – or so it said when the Health and Disability investigation was done. Quinntins cause of death was deemed “Asphyxiation due to aspiration of stomach contents” as there was milk in his lungs. There were also 2 other possible causes of death that couldn’t be ruled out.

We believe that the lack of oxygen at birth with my placenta tearing away caused his motorskill development to be slow. This was also ignored by his pediatrician when we raised our concerns.

Thank you for allowing us to post this story.