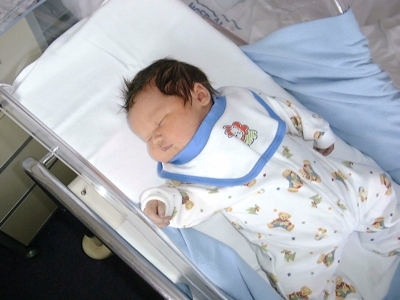 So Thankful For My Aizen…October 2004

I hug him every day and offer thanksgiving that I have a happy, healthy little boy to treasure.

How do you make a long story short?

I wish I had listened to my own instincts more closely when my midwife advised me against having gestational diabetes testing. I should have looked for another health professional at that time. I knew that i was over-weight and in a high risk bracket and didn’t understand the reason to *not* have this relatively simple blood test. Reluctantly she gave me a form at the 28 week mark and I went to have a Polycose test. That was on a Monday.

On the following Friday evening, I had noted that I didn’t feel any kicks from the baby that day so I called her. She sounded annoyed. She advised me to drink a glass of water and lay on my side and ring back if nothing happened. Luckily, I did begin feeling kicks within the hour. The next Saturday morning, she called and invited me to come in for monitoring to make sure everything was ok. I did go. It was then that she said that my Polycose test was high and I should go in for a Glucose Tolerance Test. “No rush,” she said. I went in first thing on Monday morning for the test. I was now 29 weeks along.

On Friday I received a call from her advising me that she had received test results (a few days ago) and that she would refer me to diabetes clinic. I was 30 weeks along by the time I got a call from them and 31 weeks before I got to see someone for assessment. By the time it was determined I was insulin requiring I was nearly 33 weeks along and the baby’s size was already large. Liver enlarged. I struggled to gain control. I did not. I needed to be induced at 38 weeks. Because I’d already had a c-section the risk for uterine rupture was high and there was a greater chance that the induction would not work.

My midwife did not show up for my induction. She never phoned me. She stopped by the hospital to check on me when she had other business to attend at the hospital but if she’s not had that “other business” I doubt that I would have seen her. The hospital staff were fantastic.

Sadly, my induction failed. I was taken for an emergency c-section. My husband called the midwife and she showed up in the theatre about 5 minutes before my son was delivered. My beautiful baby boy was born 2 weeks early to his 4’10″ mother weighing in at 9lb 9 ounces. That’s a big boy for my body. His blood sugar’s crashed and he needed to be taken to Newborn Unit for help. He was big, but within a couple of days he was ok. If I had not insisted on having the blood tests, the diabetes never would have been found. He may not have had his blood sugar checked and the result could have been brain damage or death.

I did not trust my midwife enough to leave a main hospital to transfer to a small community hospital.

I was discharged from hospital on Wednesday. The midwife was to come see me on Friday. She called repeatedly through the day to inform me that she was attending a birth at the community hospital near my home. .I was eager to get my staples out. I spoke to her at 5PM and she said she had delivered baby and asked me to come to her at the unit and she would remove my staples. I did this.

She told me the baby she had just delivered was a bit green because “he had been swimming in green poos for a while”…..I said, “please, my staples can wait. Please make sure that baby is ok.”

My staples were removed. I was given a clean bill. I told the midwife I was experiencing shivers and lower abdominal pain particularly when I was trying to sleep.

Her reply was that I was over-tired and needed more rest. Trying to keep up with my 2 year old was apparently taking a toll on me.

That was the advise I was given for the next 2 weeks. I spoke to her at least 3 times about the pain and chills. She never actually looked at my wound or drain site but assured me that I was absolutely fine.

She assured me of this until one day I woke with a fever of 39. Yet again she was late for our appointment. She needed to be with a woman while they tried to turn her breech baby. She was also checking up on the poor baby who was born the day my staples were out because he remained in NBU and wasn’t doing so well. I advised her I was going to see my GP and she then agreed to come straight over.

She checked my wound and at this stage I had full blown infection. She wanted to return to her home and ring the registrar at the hospital because *again* her cell phone had died. I told her I didn’t mind if she made a toll call from my home. She called and explained the situation to the doctor on duty. I was asked to report to hospital immediately. My husband packed up my son and me and off we went to hospital, dropping my daughter off with Grandparents on the way, prepared for a one to two night stay. The midwife at the hospital was shocked by how sick I was. I had a nasty case of cellulitis. Had the mass of infectious fluid burst inside of me, the outcome could have been far worse than what it was. “Women died from this kind of thing not so very long ago,” are the words that echo in my mind…the words of the midwife on duty that night.

I spent a week in hospital on IV antibiotics. I had to send my son home with my husband for the first two nights as I was too sick to care for him.

I never heard or saw my midwife during my entire stay in hospital. A few days after my discharge I phoned her as it had been nearly 3 weeks since my son had been weighed. She complained about the hospital staff and how slack it was for them to not ring to let her know I had been discharged…..In my heart, it was the hospital staff who saved my life. Had my midwife NOT been slack, a course of Augmentin 2 weeks post partum would have prevented all of that.

I’m lucky to have my son but it should not be left to luck. I will never take him for granted. Looking back, I feel as though we teetered on a thin wall and things could have easily gone one way or the other–good or bad. We were lucky.

I contacted the HDC to address what Aizen and I had been through. I had a difficult time getting my notes from my midwife and with the help of the HDC I was able to obtain them. They then encouraged me to address my issues with the New Zealand College of Midwives. I wrote a letter to the New Zealand College of Midwives. I never heard from them. In my heart I had hoped they had encouraged the midwife to better her practices…..

Then I read of wee Charley. Mum and Charley were cared for by the same midwife. Charley was delivered at the same unit I refused to transfer to because I was worried about the quality of care I would receive. Did the New Zealand College of Midwives do their job? Could the HDC have followed things through and encouraged me more? I wish they had. Perhaps Charley would be the thriving happy little girl she deserves to be had more been done when I went down the suggested path….