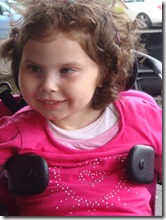 Our only child Ashley was delivered on 3 May 2007. She is our first child and will be our only child due to the trauma experienced around her birth.

I was advised it was best to give birth naturally so when our baby hadn’t arrived 14 days after due date, I was induced.  Things went down hill very quickly, our baby’s heart rate dropped dangerously low within 10 minutes of being induced. It did not help that 5 minutes after being given the drug for induction my midwife left the room for 10 minutes.  On her return she noticed a problem, changed monitors, saw the problem still existed and called for help. I went under general anaesthetic and Ashley was delivered 27 minutes after her heart rate dropped.

She was delivered white, floppy and not breathing with an APGAR score of 0, and after 10 minutes 4. She had seizures throughout her first day and fought very hard for her wee life.  She spent 4 weeks in NICU.

She has cerebral palsy, is 95% tube feed [oral feeding is progressing though very slowly], is non-verbal, non-ambulatory and has severe reflux [she has great hearing and good vision]. She is completely dependent on us for day to day living.

Two very important things would have changed the outcome for Ashley. Firstly being in my late 30s I was left far too long to be induced. I now know that I should have been induced on Ashley’s due date because in older women the placenta reaches its ‘use-by’ date sooner than in younger Mums.  When I was induced the drug basically stopped the placenta from working. Secondly had my midwife been in the room at the onset of the drop in heart rate, the severity of Ashley’s disability may have been greatly reduced.

My daughter has a life-long disability and as parents we will do everything we can to make Ashley’s life as happy as possible, but I will always feel responsible for not asking enough questions and for believing in a maternity system that ultimately put my daughter’s life at risk.  Unbelievably, I now know that compromised births where disability occurs, are not currently recorded in NZ.