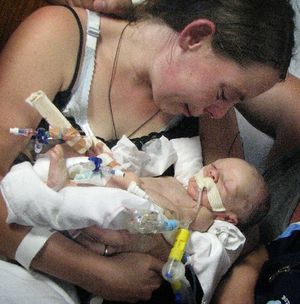 In 2004 I went through a 26 hour long labour with my daughter which ended in a transfer to Dunedin hospital and a c-section for failure to progress past 4cm. I delivered a 6lb 10oz healthy girl, and even though my daughter was healthy I felt very scared to go through labour again as I felt my midwife was unable to provide me with proper care before & after my daughter was born.

So when I found out I was pregnant again four years later, I was scared.The midwive I chose this time gave me a lot of information about pregnancy and birth and I felt like I was getting the information that my first Midwife failed to tell me! During pregnancy there was a few times where we didn’t see eye to eye but because of her knowledge I stuck with her.

Around 12am on the 21-02-09 my waters broke. Around 3am I went up to Rotorua hospital. I had decided not to contact midwife as she had informed me not to go up until contractions were 3 minutes apart but following obstetricians advice that I needed to be fully monitored I went up and informed nurses that I needed to be monitored, which they attached me to the CTG and left to contact my midwife. When lmc arrived she said I didn’t need ctg on as it was just formality! During my labour, my partner was there helping and midwife was walking up and down the corridors most of my labour. When I started pushing, midwife yelled at me for “breathing wrong” and said she needed to get obstetrician in so they ended assisting with my son’s birth with ventose.

At 11.40 my son was born 6lb and not breathing. Pediatricians rushed in and one explained that Meconium was in his lungs and stomach and he was fine just needed to suction it out. He was then rushed to scbu. 6 hours later he was transferred to waikato hospital. When I arrived I was finally informed as to the seriousness of my sons health. The next day at 2.40pm, surrounded by all of his family at Waikato hospital, my son Axton Tutahi Mead passed away.

Lack of monitoring resulted in Asphyxia.

I believe if we were monitored better then my son would still be alive. The Coroner agreed.

The midwife continues to practice.