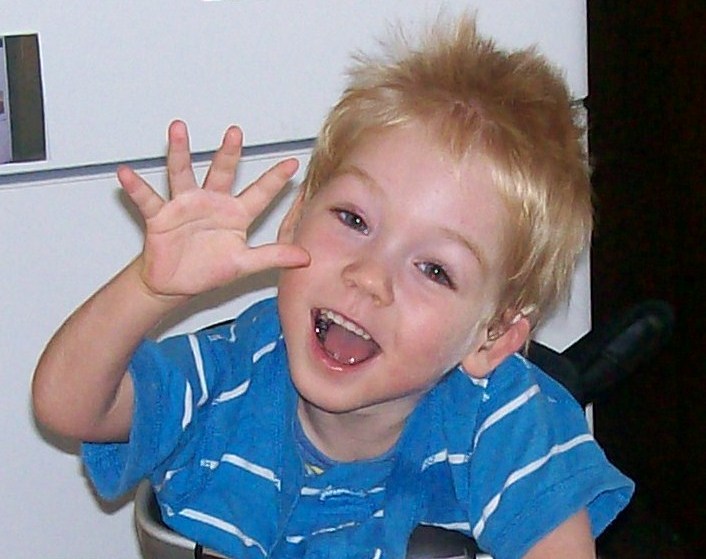 Brad is my first and only child. I rang my midwife at 4pm as my waters had broken. Brad was 4 weeks and 1 day early so the midwife said we had to go to North Shore Hospital. She also said on the phone that she wouldn’t be coming as she had just spent the last 24 hours down there with another lady that had complications and she needed to get some sleep. I found out later on I should have had another midwife called in. This didn’t happen. I was fully dilated at 9pm. My midwife did not arrive til 11.30pm. I had no-one there at all telling me what I needed to do, and my body was just not telling me. Finally, she told me to push down around 1am. Those where the words I needed to know.

I had Brad at 2.16am. Every thing was apparently fine. The hospital sent us on our way at 9am, just under 7 hours after having a premature baby with a lot of jaundice…

Life was not good at the start. I was going to the doctors twice a week from when the midwife handed Brad and I over at 6 weeks old to the health system. I rang the LMC when Brad was 9 weeks old asking for help. She did nothing. Finally at 5 months old after a few words spoken, someone who knew what they were doing took 30 seconds to look at Brad and said he has a brain injury. I was told this should have been picked up at Brad’s 6week checkup. Brad was rolling over at 5 weeks old from his spasms. Brad’s brain injury was caused by neonatal hyperbilirubineaemia resulting in kernicterus/bilateral hearing loss/severe dystonic cerebral palsy – ALL from jaundice not being treated!!!!

As parents we are faced with a lot of things that can not be put into words. You have to live with a family for a week and see what a daily routine is for them. Life is filled with appointments. Half the time, they are just for 3-5 minute check ups in Auckland (1.5 hours away for us). This could just be done with a phone call. Brad’s tone sometimes meant we couldn’t get him in a car seat. He was too stiff. We wouldn’t leave the house unless we had a appointment in Auckland then we would have to get him in the car seat. This would take up to half an hour. Then we’d hear him screaming at the top of his lungs all the way there and all the way back. This finally changed when Brad was nearly two years old. Brad is nearly four years old now and still doesn’t sleep through the night. Life with Brad is always a two person job. He takes two people to get him into his chair – tone again. He is so strong and stiff you think sometimes he is going to break in two. He needs two people to get into his equipment like his standing frame. I can only just take Brad to get groceries now – he is four years old! But this still takes two people to get the 25kg chair in and out of the car. We are very lucky we are self employed. We need to both be home 80% of the time for Brad to meet his needs. ACC need to come to the party. We fight for things that our child needs not what we want. I have to fight for everything for Brad. I just don’t want to feel like **** everytime I ask for something for Brad. ACC – it’s meant to make our lives better & easier and the fact is, its still damn hard and all the time we spend having to ring people or email every week to make something happen… It’s just not fair.

We don’t get to have a normal life. It’s surrounded by assessments, appointments, phone calls and emails.