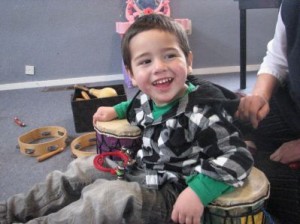 I woke the morning of the 15th May 07 at 2am to what I believed to be my waters rupturing. My labour pains were very mild at this stage, so I cleaned myself up and tried to go back to sleep. I lay in bed for about five minutes, but failed, there was no way I was going back to sleep. The excitement starts to kick in, so I decide to have a shower to pass some time. Half an hour into it the pain increases and is irregular. After an hour i get out (yes I loved my showers when I was pregnant) and call my midwife to fill her in, I explained that my waters had gone, the irregular pain I was experiencing and that I had not felt any movement since before 6pm the previous evening. So we both made the call to meet at the hospital at 4am.

By the time we arrived at the hospital the pain was semi-intense and was still irregular (2-4 contractions in arrow with a very short break in between), and feeling nauseous.

We were checked into our room and a routine examination was done-Dilation 6cm – FHR 133bpm.

At 5.30am i decide to have a shower to see if it would help with pain, and it did- FHR 140bpm. When I got out I tried to have some NO2, but that did not do a thing. I remember feeling like I was going to be sick, I can’t quite remember if I did or not- FHR 120bpm.

At 6am I decided to have yet another shower this time it made the pain worse – FHR 152bmp.

The pain really started to take over, I was not getting any breaks in between contraction, so midwife decides to give me Pethidine. Drugs kick in, and contraction start to ease and become regular and much easier to manage. I am able to have a nap in between contractions. So everything from now until I start pushing is a blur – FHR 128bpm.

8.40 is when it all went wrong FHR dropped to 70/80bpm this is when a registrar was called in by LMC and distress continues 80/100bpm, 120, 108, 92, 70, 110, 101, 106, 101, 84, 102, 134, NO FHR, NO FHR, NO FHR. This was from 8.40am to 9.23am. During this time there was no assistance what so ever to get him out alive, I recall my midwife saying to me that she didn’t want to cut my vagina to help get him out, because it would have meant a slower recovery for me. A Dr was called in to resuscitate, I still remember him yelling at the staff for failing to resuscitate, as all they could think about was who was cutting the cord. 3 lots of adrenalin and heart compressions, Resuscitation successful. At this stage I had no idea what was actually going on, they took him away to NNU. I went to NNU to see what was going on, I waited and waited. The Dr came out to speak to me and my Family to explain my baby’s condition. He was on life support and will not live without it. He left us alone.

Within less than a minute the Dr came back with some hopeful news, Baby has started to breathe on his own. Was then flown to Dunedin NICU for treatment.