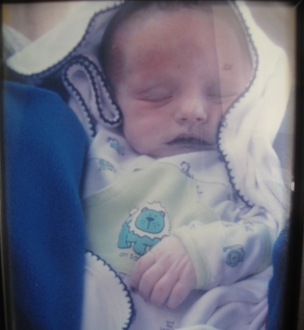 Our first baby was 10 days overdue.  We planned to be in a birthing unit as never considered or where aware how dangerous childbirth was in our country.

Our mid-wife came to our home after the third phone call to advise that I was in labour, the first being 8pm (waters broke report), 11ish (vomiting and diarrhea and constant contractions) then finally 1am when we suggested we meet her at the birthing unit.  She insisted she come to us and then when she realized I was well into second stage labour (unsure of dialation as had no vaginal examination) she suggested it was better if we stayed at home (change of birthing plan also suggests a vaginal examination be performed).

After labour slowed (which is also another point where midwifery practice suggests a vaginal examination) an examination was finally performed around 3 hours later when during actually delivery they saw the bottom and not the head of our baby.  After intense agony to deliver our son, an episiotomy, Cameron was finally delivered with his heart beating but he had suffered asphyxiation. He devastatingly never took a breath.  His neck was also broken on delivery something that I find totally disturbing even now nearly 6 years later.

We were in the wrong place. We should never have been at home 10 days overdue, we were never offered a 38 week scan to determine babies position, we never had the opportunity to know what a vaginal examination was or was for, we shouldn’t have had to have waited until the 3rd phone call for a diagnosis of my birth status and we certainly should never have had to deliver a breech baby at home without help or so much as a phone call to the hospital or to have an ambulance on it’s way.

Thank you thegoodfight for hearing our stories and if you are someone reading this who can institute some change before another baby needlessly dies then please do what you can to implement the change.  We and our birthing professionals need to be proactive and not re-active to anything not “normal”.  Currently it is conflicting between professionals, bonuses paid to midwifes who promote homebirth, it is damaging to our children’s heath (how many near misses result in learning disabilities due to pro-longed labour and unnecessary asphyxiation?) costly to societies on-going health system and dangerous to our mothers and babies.