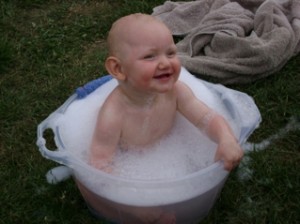 Yesterday I filed away a letter to Health and Disability Commissioner. It has taken me 18 months to feel strong enough – now I try to start to fight the fight for my wee man Cooper.

We started labour at home at 40 weeks 5 days. After going all night I headed to the birthing suite where I laboured until 4pm. Things were not okay. My sons’ (I didn’t know at the time he was a boy) heart beat was fast from early on. What I believe to be meconium came away and it was decided I go to Dunedin (we were in Oamaru).

ONE HOUR later the ambulance finally arrives. After what seems a life time I am scurried away. Arriving at Dunedin I am bombarded with a million questions which I was in no state to answer…one and half hours later I was knocked out and Cooper was taken.

As I slept the anesthetic off, my husband was torn between being there for me when I woke or to be with our son as he fought for his life.

Cooper was born flat, apgar 1. Crash cart and straight ti NICU. Three hours later seizures started. My darling wee man seized for two days. On the 24th of December we finally were allowed to hold him…Best Christmas gift I ever will get!!

My son has moderate CP, global delay and a list longer than my arm with other wee issues. He is amazing though. The smiles he smiles are for those who can’t or are no longer here.

Cooper was meant to go to Heaven but he knew his Mummy and Daddy needed him here. His angel wings have been clipped and I know with all my heart how lucky I am… he is still with me. But we were less than a minute away from losing him.

I asked to go to Dunedin as I was scared but the midwife told me I would be fine – and I believed her. First time Mum!!!! I did not know funding and bonuses were behind the scenes….

Nothing will ever give me back the gift of being there when he was born. Nothing will take the amazing pain he felt for the first 6 months… but if by chance my voice is heard and it can help save a baby or give all mothers a voice – I am there.

I KNOW how close it was for us, and that is a pain I have no words for – the pain does not ease, it’s just something I learn to live with. For those of you who have lost, my baby boy smiles for you, he reaches his milestones (slowly but surly) for you… We don’t get bitter about his disabilities etc, as WE know we are the lucky ones….