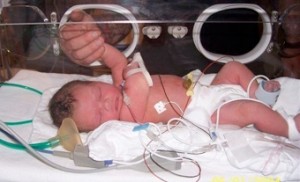 My pregnancy was unremarkable. “Thumper” was very active and seemed to be doing what she should. The lady doing the scans got frustrated with her not staying still for the measurements. We had to have two and still didn’t quite see everything, but nothing remarkable, so when my midwife asked if I thought I needed a third, I declined…

On our due date around lunchtime I went into labour, and deciding against calling into the hospital while I was in town (didn’t want to be a nuisance….) I went home. It was very intense, contractions being one minute on, one minute off for most of it, and then they just got longer and quicker from there!

The midwife was called and came out at about 6pm I think. A check showed I was about 3 or 4 cm and she commented my labour was very ‘efficient’.

We headed into the hospital at 7.30 and I got into the bath while the pool was erected.

All continued to plan until we had a warning sign of thick mecconium in my waters when they broke during an internal check before I got into the pool, which was about 90 minutes before she was born. The midwife said I would not be getting into the pool and we were monitored for the rest of the labour as much as possible. I hadn’t factored mecconium into my birthplan! And with only 40 second breaks between contractions by now, it all went in one ear and out the other!

I know I thought ‘C-Section – get my baby out!’ during a contraction, but things were so intense by then I couldn’t voice it. To be honest I was so engulfed with the contractions, I forgot all about it for a bit I think.

I knew we were setting up for an emergency ‘just in case’, but my sister’s second child had had mecconium too, and he was fine. Once Daryl had gone down the birth canal, when I was pushing, there was a time (I’m not sure how long) that the midwife couldn’t find her heartbeat to monitor her. I don’t know if this is normal or not. I do know that I wish a scalp monitor had been put on.

Still, things were progressing, it seemed everything had been readied for a potential emergency – bases covered, right?

Daryl-Ann was born at 11.11pm on the 22/11/06. When born she was ‘white’ and did not breathe. She shot out of me like a bullet from a gun, no stopping for turning of heads! She was put beside me while the midwife assessed and tried to get her to breathe by rubbing her with a towel. I touched her foot, and started chanting ‘come on baby, come on baby’. 20 seconds later she was whisked away to the other side of the room where the emergency stuff was. I remember the midwife screaming ‘where’s paeds????’ – I think she’d been on her way to call them (I’m pretty sure they were on standby), when she looked at me and saw the baby was coming NOW, and I assume she sent the other midwife to go and call them….

The paediatrician ‘strolled in’ (I didn’t see, but that was Rob’s impression, and my Mum’s) a few minutes after Daryl was born. The midwife (wives) and nurses (NICU I assume) were already doing CPR and chest compressions. Daryl took her first breath at 6 minutes, and established a breathing pattern at 20 minutes. (Apgar was 1, 2, 5)

We got a quick look at her in the incubator before she was taken upstairs to NICU. We thought she’d just be in there overnight, after all she was breathing, and was quite pink when we saw her. Everything seemed under control now. So I got cleaned and stitched up, and then we went upstairs to meet our daughter.

The paediatrician explained that her injury was like a moderate concussion, and we thought ok, she’ll be a bit slow. Not the brightest in the class. We’ll deal with it. We couldn’t really get our head around it yet though, as only a day before we’d been amazed at the idea that shortly we’d go to hospital and come home with a BABY! As easy as that! ….. well, we thought it was too easy!

She then spent 3 weeks in NICU battling with a pneumothorax (which was diagnosed, but not treated for 24 hours), seizures and edema all over. The edema meant that her brain was swollen. This meant that her brain was telling her body not to urinate, which in turn meant that her body, and brain, swelled more. Her head was 34cm at birth, and just over a week later it was 36cm. She was put on half rations to dehydrate/starve her, so that she would start to wee, and it worked.

Before she was 24 hours old, she had required resuscitation again, and had started to have seizures, so was given a couple of anti-epileptic drugs which knocked her out for the next two weeks. We were desperate to have her awake, but sleep was better than the awful ‘sunset eyes’ seizures she was having.

Various scans showed she had hypoxic ischemic encephalopathy, and we were told she was unlikely to walk, talk, eat or even breastfeed. In fact, we would be lucky if she made it to her first birthday, as she would likely be killed by infection before then.

Everything we’d dreamed about while planning to have a child, and especially the last 9 months – fell in a heap on the floor. Life would never be normal again. To make matters worse, while in NICU her blood sugar and temperature were not controlled quickly enough, causing more damage.

What made the whole thing so much harder was that the mothers whose babies were up in NICU (on the 5th floor) where put in the room right at the end of the corridor of the Maternity Ward (on the 2nd floor)…so every time we went up to or came back from NICU, or went to get the breast pump or anywhere else, we had to walk past all the rooms with mothers with their babies beside them. I should have had my baby beside me too. It was the most upsetting thing I’ve had to do. I was so angry and jealous of all those other happy families, who weren’t going through what we were. It just wasn’t fair.

We needed Lactation Consultants to come to NICU to help us get Daryl to breastfeed. It didn’t seem that she was going to be able to do it. We started trying a special bottle and Rob had a wee bit of success, but then a few days later she seemed to get the hang of it. At 17 days old she had her first decent ‘feed’, our first challenge met, we moved onto the next of a never ending list…

We have struggled to keep weight on her, and also with getting her to settle. When she was three months old we had to admit ourselves to hospital twice to get help, as she wouldn’t let me do anything but sit on the couch with her, or feed her, and even the feeding started to drop off…we knew we were heading for trouble. I almost lost my milk, and had to employ that hated old breast pump again.

In the end she was put on phenobarbitone, an old anti-epileptic which is also a sedative. The change was instant. She started sleeping, and her feeding improved a lot. The side effects though were that she her eyes were always quite closed and she seemed very tired. Every time we went out, well-meaning people would say ‘Oohh, look at the little darling, sound asleep!’ – when in fact she was ‘wide’ awake! Her world was subdued, and that helped her to cope (and us!), and eventually she started playing with toys sitting in specially designed chairs, playing with toys on the floor and we managed to straighten her out enough for her to have tummy time.

By now we knew that she would be diagnosed with Cerebral Palsy, and she also has Microcephaly (small head), as the parts of her brain that should have grown straight after birth were too damaged, so they never grew. She started having partial seizures around five months, which we are still trying to control with a few different drugs. She has Polymorphus Epilepsy, which is very difficult to control. The Paediatric Neurologist confirmed that she has severe damage to over 50% of her brain, including the area where the cortical nerve is, so we believe she has some major vision problems, but it is very difficult to tell what she sees at the moment.

At 2 1/2 she still cannot get her hands into her mouth, sit, walk or talk. She is very unsettled at night, and it’s not uncommon for me to get up 5 or 6 times a night to try to settle her.

At 2 1/2, most children can tell you what hurts…but for us it is still a process of elimination. Daryl’s physical needs and the bulkiness of the equipment she requires has meant we have had to put our house on the market, a house that we still love, in order to find one more suited to Daryl and her needs now and in the future. I have been unable to return to work in any normal capacity, and instead have to work during the evenings from home, after looking after Daryl all day, and then get up to her during the night.

We cannot go away for the weekend, not only because we have lost a substantial chunk of our family income, but because Daryl does not sit in the car for longer than 30 minutes. We are pressured to give her a feeding tube to make life ‘easier’ – read: ‘cheaper’ for the powers that be.

Instead of fun trips to parks we get trips to the Paediatric Outpatients. Instead of smiles that say ‘what a cute child’ we get ‘what a poor family’.

Why (according to an official report):

Because the midwife failed to follow ‘best practice’ and did not consult an obstetrician when there was thick meconnium (despite us being right there in Queen Mary Maternity at Dunedin Hospital)
Because a midwife failed to monitor a baby properly, and did not act on a questionable trace.
Because a paediatrician ‘strolled’ into the room, instead of being on hand to facilitate resuscitation.
Because that same paediatrician failed to act on a diagnosed pneumothorax.
Because NICU staff did not get blood sugar or temperature under control.

Each of these things contributed to making Daryl’s disabilities as severe as they are now. But had the midwife erred on the side of caution, according to the same report, there is a good chance Daryl would have been ‘normal’.

Were we just unlucky to have 5 things go wrong with one ‘efficient’ birth?