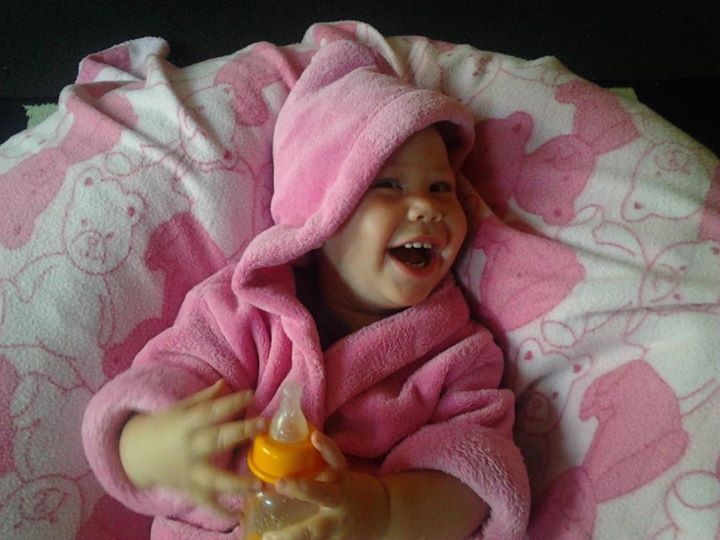 Denvah was exactly one week overdue. I had such an amazing pregnancy which I thought was pretty textbook actually! I always had in the back of my mind having such a blissful pregnancy that the birth would be the hardest and most difficult part.
Denvah is now 15 months old, and a happy, healthy, cheeky, beautiful little girl.
After following AIM’s page on Facebook and reading all these horrible tragedies, it occurred to me that my birthing experience would also be classed as horrible. I hadn’t really thought about until now how it could have gone so terribly wrong and being a first time mother how much faith and trust you put into a midwife with not only your baby’s life but your own as well.

I had been having contractions all day which were all 30 minutes apart. At about 3.30pm when they were 1 minute apart, my sisters were telling me it was time to ring your midwife and maybe go up to the hospital. I thought “No not yet, I’m not bothered” and my waters hadn’t broken yet either so I thought I’d just wait it out a bit longer. The contractions didn’t bother me as I have a high pain tolerance lol – lucky me! At about 5.45pm, my mum comes home and pretty much tells me to ring the birthing unit at Rotorua Hospital and tell them my situation. The midwife then told “Yip, come on up”. I was with the Tipu Ora maternity services. They had 3 different midwives, all of whom I had met and seen during my pregnancy so it could have been any of them who would be there for my birth.

So at 6pm I arrived at the hospital, had a check up with the midwife that was on at the time. I was told that I was already 5cm dilated by then, and that because I was so far along she would break my waters for me. I was fine with that. But at 7pm the first midwife’s shift was over and she was replaced with another who I had seen throughout my pregnancy so it was fine, but this second midwife didn’t want to break my waters for me. She stated that she wanted them to break “naturally” so, being a first time mum, I thought “Ok, well, she knows what she’s talking about”, so I walked around for an hour or so, sat on the toilet for another hour or so, just waiting for them to break. She monitored baby throughout this time so it was fine.

At about 10pm my contractions were really, really strong and intense. I could feel the pressure – probably the ugliest pain I have ever felt down there – and yet she still wouldn’t break my waters. At this time I was on the bed (about 10.45pm) and all of a sudden I felt the urge to push. I couldn’t believe it. My waters were still intact so, at 11.15pm, she finally broke them for me. I was given gas to help with the pain, hot packs for my back etc.

So I kept pushing. One hour went past. My midwife told me I was doing great and to “Keep up the good work”. So I did. Two hours go by – still pushing. I asked her how much longer before my daughter be out and she then told that being my first time giving birth that I could be pushing up to a total of three hours!!!!!!!
By then I was so exhausted and my emotions were running wild. The midwife hadn’t even checked my progress. She stayed a couple of feet away from me “writing notes”.
My mum spoke up and said “Look, baby should be here by now. Don’t you think you should be doing something??”

My midwife then left and came back with another midwife who checked me out and told me I was also doing a good job and to not give up and keep pushing. It was at least 2am. So I kept trying to push my daughter out, and she was crowning but kept being sucked back up I guess. At 2.45am I’d had enough and by body was telling me that something wasn’t right, so I yelled that to my midwife who then went and got the obstetrician who came and saw me. He examined me and told my midwife that I needed to be prepped for an emergency c-section.

I was terrified. All of a sudden six different people burst into the room, trying to get a drip in my arm which took at least six tries as I couldn’t keep my arm straight because I was still pushing. Lots of blood was pouring out of my arms as they tried to get a lure in. I was so scared. No-one was talking me through my situation. Another person was trying to insert a catheter, which was also horrible as I was still pushing, and still no-one was communicating with me. I just thought at the time this is what they do.
Then I heard someone say quietly that I had meconium coming out of me and that they needed to hurry because baby was stressed. This was the most pain I have ever experienced.

I was rushed into theatre – I’m not sure at what time – but at 4.59am my beautiful daughter was born, a healthy 8lb5oz. I was stitched up and taken to recovery where I held her for the first time. She was perfect.

Still, no-one had told me anything. My midwife didn’t come to visit me or baby to see how we were. Nothing. My baby had a large dark bruise on the top of her head. It wasn’t until I got my discharge papers like 2 weeks later stating why I had to have major surgery. It said baby was posterior and her head had been deeply dislodged that’s why I didn’t make to stage two of labour.

I am so happy and grateful that after such a traumatic, ugly birth my daughter arrived safe and healthy and to this day she has had no problems, apart from the massive bruise on top of her head that went away after two weeks. But I cant help thinking what if? And I would really like to know what the outcome would have been if I didn’t listen to my body?

I would like to say, from the bottom of the heart, I am so very sorry that the system has let so many families down. With technology and the resources that we have today, no innocent child or mother should die due to poor, careless care that is given during the birthing process. I personally believe that doctors should be the ones delivering our babies and that midwives should do the before and after care, and while your giving birth they should be there for support but doctors should oversee everything! This way, faster responses would happen for times where it is truly needed and we wouldn’t need to experience such tragedies.

Thank you, AIM, for letting me share my story! And keep up the good, amazing work you do!

Lots of love,
Kiara and Denvah