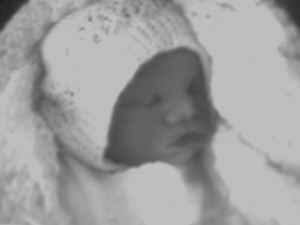 My name is Joy, I’m 26 and a mother of three. It’s sometimes a hard statement to make when people want to know why they have never seen the third child. But I cringe inside if I say I have only two. My daughter, Evelyn was here. She kept me company for just over eight months and I knew her well. But when I tried to tell the doctors she wasn’t kicking enough, they didn’t believe me. This is what happened to me:

My first pregnancy was quite fun. Even the thought of having my son in (a third world country) Tonga didn’t faze me. When I realized the large lump in my tummy had to come out soon I did start to panic! My mother told me: “it’s just one day (possibly two), and it is so worth the end result!” And it was. I developed a small leak at eight and a half months and had to be induced early. Shiloh stuck in the birth canal, not due to size but position and the doctor made the perfect decision. My water’s had broken but my labour was still not progressing so they took me in for an emergency C-section. Perfect care in a small under equipped hospital in the islands. The C-section did mean that when I returned home to have my second child, I would have to have my in Christchurch Women’s Hospital in case I needed a second Cesarean. I would be in the best place if something went wrong.

My horror story started when I went on the 24th of November 2005, to tell my midwife that I/we were feeling sick. I was feeling terrible but I was worried because I didn’t feel Evelyn was kicking enough. I saw the doctor and following tests, I was admitted to Christchurch Women’s Hospital with a severe reaction to Hepatitis A. They kept me in isolation and I saw a couple of different doctors who reassured me that the Hep A wouldn’t affect the baby. I asked for the scan that I had been told that I would receive and was told that they were trying to organize one, but because it was a weekend, there weren’t many staff on duty.. I was released after the three day isolation without having a scan and the doctor’s reassured me that the monitor they had put me on showed that she was kicking enough. I was given a ‘kick-chart’ to fill in which clearly showed how little she was kicking (as far as I was concerned) but all a doctor/midwife needs in order to say the baby is fine is 10 kicks in a 12 hour period, which is VERY LITTLE movement. If I had known then what I know now I would have kicked and screamed until I got that scan. But I had faith in the hospital and the doctor’s. Now my advice is, if you don’t feel things are right, push and push until the specialists around you take action. Because I listened to what they said, and three days after I left the hospital, my daughter was dead.

My family drove to Dunedin on the second of December for my sister’s graduation from Med school. During the drive I felt the contraction’s starting and they continued to build. My sister recommended I ring the helpline and they told me to go to the hospital. So we went straight to the Queen Mary Hospital there in Dunedin. I was swept quickly into a room and the doctor hooked me up to the monitor to check Evelyn’s heartbeat. And there was nothing. The doctors informed me that I had to try for a natural birth or I would have to have a c-section with any other children I had. At this hospital I had the most amazing care from the midwifes and doctors, my family and I were given the most kind and considerate care throughout the next few days. At 3:59am the next morning I gave birth to my daughter, Evelyn Faith. She was a full 35 weeks. A perfectly ‘viable’ baby. Now I am left with these questions, still unanswered. I did have an appointment with a Doctor at Christchurch Women’s following their Mortality and Morbidity meeting at which they discussed my daughter and decided that it was handled adequately. The hospital was polite but left me with the impression that they had no wish to admit to any failure at all. I will always wonder because I have been told that had I had that scan, the doctor’s would have seen the meconium and that would have been proof that she was distressed. I could have had an induction and have been holding her that day. I saw Charleys story on TV and I was amazed at her parents strength. When I saw Dr Lynda Exton on TV talking with yourselves and the Minister of Health I had to write. Thank you, thank you.