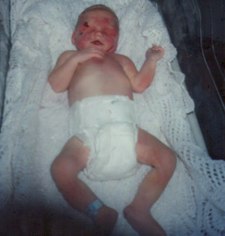 I was a 20 year old first time Mum living in North Canterbury, I was on my own as I had split up with the baby’s father early on in the pregnancy. I phoned a midwife and signed up with her as I felt comfortable with her and the student who she had with her.

The student was about to graduate and I would be signed over to her once she did so and be her first delivery as a fully trained Midwife, but for the most part the both of them would be caring for me and the more experienced Midwife would remain my LMC.

We went through the signing up process and when it was time to talk about family history I very carefully told them about my mothers history of Toxemia and how she had to have an emergency C-section with her third child 6 weeks early.

For now this was put out of our minds though and my pregnancy progressed with a jump up in my blood pressure about half way through. This however was disregarded as it stayed within a good range from that point but did not return to normal however and remained at its raised level.

Approximately 1 week prior to my due date I noticed some swelling in my legs. It was, as I was to discover all too late, what they call ‘pitted oedema’. I had been swimming with friends at a pool in Christchurch that day and noticed that it started at my feet and continued all the way up my legs. It also remained dented when I pushed on it and let it go.

I phoned my LMC who was now the student as she had graduated (not that we had completed the paper work). She informed me that the more experienced midwife lived in Christchurch and she would contact her to come and see me at my friends house.

She arrived later that day and did not even look at my swelling. She also failed to do the most basic of tests like a urine test or even my blood pressure. She got me to lie down and then checked the baby’s heart beat telling me it was a lovely healthy baby. Pity you couldn’t say the same thing for it’s mother; this was the very last time I was to hear my baby’s heart beat.

Now if I had known better I would have gone straight to the hospital but I went home and on the day my son was due to be born I awoke with a terrible migrane, blurry vision and swollen from head to toe.

My mother phoned my midwife (the new grad) and she very reluctantly came to see me. She informed me that she was unable to find a heartbeat and that we would have to travel the 30 minute drive into Christchurch Women’s Hospital.

We did so and once we got there they did some tests and a scan and told us the heartbreaking news that yes, indeed, my son had passed away.

Everything is a blur from then on but I do know that my blood pressure was dangerously high and I was becoming gravely ill. I was now in the care of the hospital.

The decision was made to induce labour and I was given an epidural so I would not have to feel any pain. This was at about 2pm in the afternoon by this stage. At 6pm labour was established. I very nearly needed a C-section as my Kidneys began to fail and he would not come out. They used an array of methods and finally 12 hours later at 6.08am, after threats of a transfer to the ICU at public, my son was born.

My memory of that night is patchy as I was in and out of consciousness. I remember when he was born being shown a photo but my eyes were almost swollen shut and I could not see it. After 3 days of around the clock one-on-one nursing I was moved up to the maternity ward of all places. Every night and day all I heard were babies crying; a new mum without her newborn. It was awful and the only complaint I would have about my treatment at the hospital.

I did not see the more experienced midwife again after the night my son was born night nor did I want to. I’m not sure why she didn’t contact me; I wonder if it was guilt. Sorry, yes, I did see her at my son’s funeral but she did not speak to me.

I was discharged from the hospital 5 days later after being allowed out for my son’s funeral. Leaving his grave was like ripping out a piece of my heart.

I continued to see the new grad midwife for my after care and finally signed the forms to make her my LMC, which she made me back date.

There was a hospital inquiry but I really don’t know what the outcome was. All I knew was that my son was dead and nothing was going to change that. We had an autopsy done and it revealed that he would have been a perfectly healthy baby if he had been given the chance to live.

Rest in peace my precious Angel.