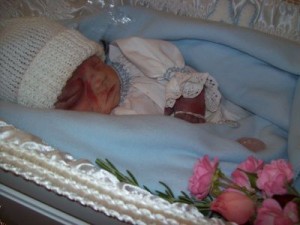 Well this story really needs to start before I had Kaha. With my first son, my waters broke at 24 weeks, but I didn’t deliver until my son was 28 weeks gestation due to Untreated Diagnosis of E-coli in Waikato Hospital, which was picked up before I had my emergency C section which ended up almost killing both of us with infection a week or so after he was born. A lot of up’s and downs but we have a very active healthy son.

I got pregnant about a year after. I looked on the internet, I begged my GP but no-one would give me a cerclage (a stitch to support the neck of the womb so that a premature birth can be avoided). Anyway 24 weeks comes and exactly to the day, my waters broke with my second child. Along we went to Waikato again to wait until, hopefully nothing happened. This whole time I was bleeding too which was monitored by the obstetricians closely.

After 6 weeks this baby decided he was coming. I was taken downstairs to give birth, asked what I wanted. Told them whichever would be safer – of course. Labour was long and they ended up having to put a monitior on his head and was also given oxytocin to speed up my labour. There seemed to be a few concerns with the midwife and the obstetricians but that could just be hindsight. I couldn’t push him out. They tried foceps as the labour had been very long and I was exausted too. No they couldn’t forceps the baby because it was too high, so I was taken in to surgery for another emergency C section. A lot of that time I think I have blocked from my head but I remember the surgeon moving and tugging and it didn’t feel right at all. My uterus apparently had flopped over and made it difficult to get my baby, who we found out was a boy (I decided I wouldn’t find out ” at least if he early I will have something to look foward to” I said). When I saw him he was bleeding out of his nose and mouth. I totally wrenched my heart out. His head on one side was like a big black bowling ball. One of his arms was also black as midnight. It was from having to force him out. That ended up killing him in the end. I asked the doctor why I wasn’t given any choices. There’s not a day that goes by I wouldn’t have sacrificed my uterus for him.

We called him Kaha because all that went through my head was “Kia Kaha”. He lived eight hours. Those were the hardest eight hours of my life. I never got to see past the tragedy that was unfolding in front of me. I was too afraid to even kiss him. Thats my biggest regret.

I haven’t showed anyone the photos of him before he was made up for his funeral because they are too graphic and depressing. The funeral directors kept him in the freezer and also applied makeup to try and disguise some of the bruising on our request.

I have been given all my notes. He was sent for a post mortem. I had to keep ringing and ringing them but eventually we were sent the results. On one of these phone calls I was asked whether I wanted an Inquest or a hearing on paper. Then when I got it finally, there were no qualms anymore. I also had a meeting with my Obstetrician, he was shaking while I was asking him questions but just basically told me it was a difficult surgery and hindsight was a great thing. I fought with ACC to pay his funeral, eventually it was paid for.

Thank-you for your time and understanding.