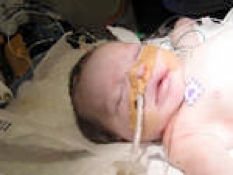 We discovered five months into my pregnancy that my baby had a heart condition called transpositon of the great arteries, so at about 7-8 months I went to Auckland to have my child at Auckland City hospital. He was to have an operation a couple of days after birth.

But to our horror he didn’t make his surgery; he got damaged during birth and died.

He was the most amazing little boy. But he wasn’t little – he was 4kg, 55cm long and I am a small framed women so Kobi got stuck.

They promised me I would be under the best care but I fell through the cracks in the system, being left to go 10-11days over.

They never let me talk to someone who would be doing his surgery and I never got to speak to someone that would be delivering him. I didn’t know the plan other than they wanted me to go naturally.

I was away from home for 6weeks in a heat wave and so huge I was doing my best to hold my head up even though I had no idea what was going on. You might say ‘why didn’t you speak up?’ This was my first baby, I trusted the “specialists” and well, I never saw the specialist!!

They induced me at 8pm February 8th and I was fully thrown into pain at 1am. But so were 4 others for the 2 midwives (this me being in “high risk”). After begging for a bath the midwife on duty told me that 2 emergencies had come in and they could’nt be with myself and my husband.

By the time they took us to delivery I was begging for an epidural (which I was against). When it didn’t work and they didn’t have any more pumps for me to top up the doctor delivering Kobi came in and looked at me and said “give her gas.” After 10 hours my midwife was worried so she went to see this doctor who said “just start her pushing,” so I did – for 2 hours. Then she came in and said I would need to go to surgery but once she checked, it was too late so out come the stirrups, the suction cap (which came off 4 times and each time I nearly vomited with the sound on his head).

Then the forceps and finally my poor little boy came out.

Kobi’s head had a bleed between the scull and scalp from the suction cap and they tried for 3 hours to stop the bleed. But his heart was badly in need of surgery. So all in all they just had to give up; because with his head his heart couldn’t be fixed.

We watched our son have tubes through his belly button, tubes everywhere… blood pouring out of his nose, his mouth, and here we were looking at this amazing boy trying to understand the decisions getting fired at us.

The H.O.D of the hospital was working on him and he was angry. He called the coroner and they took Kobi away.

We’ve been up for meetings and although it wasn’t one persons fault it was a range of people and communication break down.

They promise it wont happen again, but it will and some other poor woman will go through this.

At the end of the day Kobi Buster is dead. I will never get to hear him cry, never get to pick him up when he falls down, but worst of all, being his mummy I can’t make him better. I can’t fix him, he’s gone and our family will never be complete.

I don’t know what will come of my story but hopefully other mums out there speak up and changes are made, even though it’s to late for Kobi.