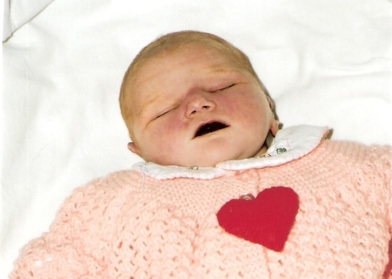 I had a lovely pregnancy and there were no problems the whole way through.

I decided to have a home birth and was told by my midwife that if anything went wrong she would get me into hospital.

During my labour the midwife would write down Laurens’ heart beat and each time it got lower and lower.

When she was born the midwife reckoned she heard a heartbeat so did resuscitation on her for 30 minutes as that was how long it took for an ambulance to arrive.

To this day I don’t believe she did breathe after birth but because the midwife said she heard it Lauren had to be taken away from us and have an autopsy done. The autopsy showed that she didn’t get the oxygen she needed when being born due to a unusually short umbilical cord.

I found it very difficult to look at her after the autopsy as I could see all the cut marks they had made on her.

My midwife had failed to inform me that she did not have access to Christchurch Womens Hospital or St Georges Hospital so even if we had been taken to either hospital she would not be caring for me.

About 15 months after Laurens death we had to go through a coroners inquest into her death. I was then 4 months pregnant with my son and it was something I don’t want to experience again.

I had a lot of people blame me for my baby’s death, saying I should have never had a home birth. I blamed myself and the midwife for a long time.

I don’t blame myself anymore. I have gone on to have 2 other beautiful children. My son is now nearly 12 years old and my daughter has just turned 10.

I do still blame my midwife as I still don’t feel she did enough. If she had of got me to hospital sooner there would have been a better outcome.

My concern is that women should be more aware of what can happen when having home births and that in New Zealand we have not got ambulance flying squads to get to a mother and child quick enough if things should go wrong.

Midwives need to be better trained with birthing. I felt that these midwives that were at Laurens birth were too laid back. I had one of them shout at me to talk to my daughter when they were doing resuscitation on her but I had gone into shock.