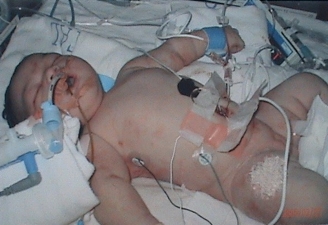 We were very concerned with 6 weeks to go and asked the midwife about 10 times about the size of our baby. Mum is a small Chinese lady with a “huge” tummy. Midwife “stated” each time with much confidence, “Its a lot of fluid and you are going to have a 6lb baby”. It was our first child, we relied on the Midwife. Later we found in the 32 week scan that stated “above” average foetal growth, and at 32 weeks the baby was about 6lb+-.

On March the 26 2005, Jackie went into labour at 3am, one day over the due date. We called the midwife about 4.30 am. She arrived about 8am (took her several hours to make the 15 minutes drive), as Jackie’s labour was progressing quite fast. The midwife checked her, then we were off to the local maternity birthing unit just up the road.

The midwife got my wife to start pushing. And not long after she decided to break Jackie’s waters, said it would speed up the labour.

There was hardly any fluid, and it was green stained. Jackie was right, it was all baby. And the green stain “meconium” is the first sign of a stressed baby. We should have had an urgent caesarian this was stated by a specialist with 20 years child birthing experiences.

The midwife ignored the warning signs and told Jackie to keep pushing. Then the midwife got a colleague to check how the baby was positioned. They both had different opinions about that. After few more hours pushing, the midwife said “The baby is returning back to its pre contraction state, you are off to Middlemore and it looks like it will be a C section as the baby won’t fit the exit…..”

At Middlemore we thought all our troubles were over……..

After some time a Dr came to examine my wife. He said she was not “fully” dilated yet. Then he disappeared. During the next very brief exam from the doctor he was interrupted with his pagers in his pocket and left the room again. This happened about 6 times when the doctor was to check out my wife. On one examination he was checking his pager and doing an internal examination at the same time. The doctor never told us what was going on or his plan of attack.

Several hours went by like this . Then my wife was prepared for a C section. She was kept pushing several more hours again. Then the doctor came in again at last and said, “lets have a Baby.” Remembering we had been transferred to this Hospital due to falling to progress about 8 hours ago.

Then the doctor unpacked the vontuce equipment and gives this a bash without telling us what he is doing. The baby became very stuck. People were pulling at the baby like a stuck calf on a farm. Midwives were pushing and pulling my wife about, a total mess.

It takes about 5 minutes to extract the child out, and about 20 minutes to resuscitate. Megan was over 10lb and very long.

The next day we are told that it was a “text book delivery”, get over it.

Baby in ICU for one month.

HDC found Midwife did a satisfactory job. The doctor was found in breach of Right 4, in failing to exercise reasonable care and skill in obstetric management.

An independent world leader in the field of brain damage in utero, a Professor of Pediatric science concluded that it was “medical mishap”. He questioned why the ethnicity of the mother and size of the baby were not pick up. He said there was early compromise of the fetal brain. that CTG evidence suggested foetal tachycardia and loss of heart rate variability from the initial recording.

“Properly given treatment would not be expected to result in birth injuries as serious as those suffered by Megan”. (HDC and ACC refuse to recognise his report).

NO help from Hospital, NO ACC, JUST LEFT US TO STRUGGLE ON OUR OWN WITH MEGAN 24-7 FOR 4 YEARS.

TEXT BOOK they all said. Come on NZ, is this how it is?