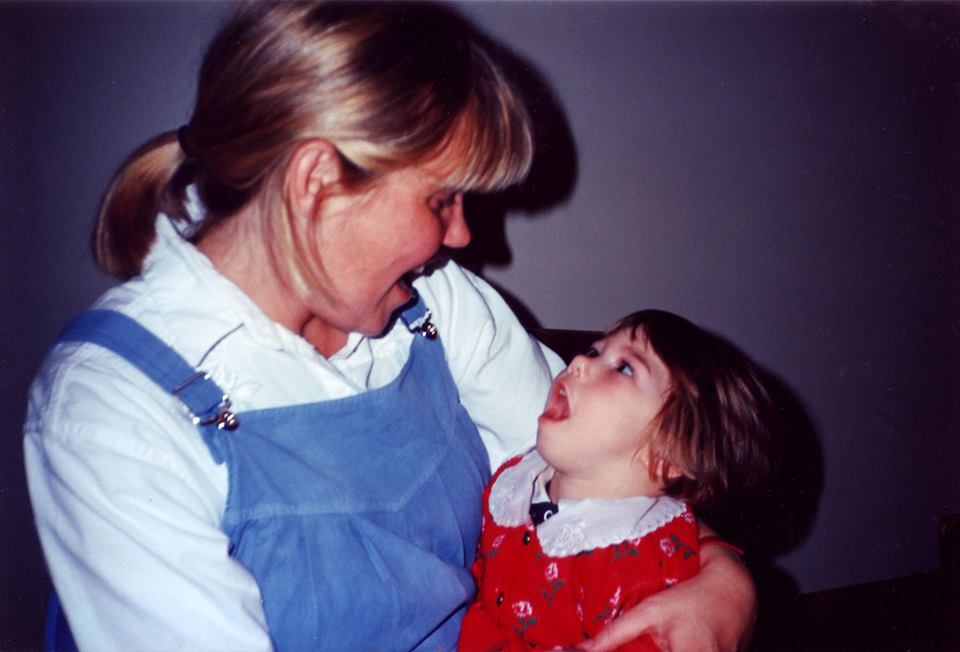 My little girl Rowan, was born severely birth asphyxiated and as a result she had cerebral palsy or severe spastic tetraplegia. She passed away at aged 3 ½ after a seizure and aspirating in the night. Her brain atrophied and didn’t grow after she was born due to the prolonged lack of oxygen during and after the birth. She never talked and was unable to control her head or limbs.

I had a normal pregnancy although the baby was large. (She weighed 9 lbs.) I was 3 weeks post term and although I went to a private obstetrician she never suggested induction. The labour started on a Friday afternoon and by mid morning Saturday I was exhausted. At that stage the midwife called another midwife in to the room and they listened to the baby’s heartbeat. One said “It’s the mother’s heartbeat,” the other said “NO! It’s the baby’s heartbeat.” (Later we realised that it was indeed the baby’s heartbeat and it had dropped dangerously low to 60 bpm.)

My labouring continued for a further 30-40 minutes until my private specialist arrived saying angrily “How long has she been in distress like this?) The midwife said that I had been coping fine. (Clearly I was not.) There was obviously some tension between the midwife and the consultant.

The Obstetrician applied a venthouse which slipped off twice, then she used forceps and I can remember her pulling for ages. It was at least 30 minutes before Rowan was born. I didn’t know at the time that I was only 6 cm dilated and she dilated me to 8 cm (a high forceps delivery.) I found out during my second pregnancy that during Rowan’s labour I had developed a swollen cervical lip. I was in theatre during the entire labour and the team of the day could have been called in immediately but my specialist opted not to hand over.

When the baby was born and handed to me she was dark blue and not breathing with an Apgar of 1. Her head was horribly misshapen and bruised and later her eyes were swollen shut and black and blue. She looked like a monster. The obstetrician told me as they whisked Rowan away that said she had a diaphragmatic hernia. (She didn’t).

They told me a paediatrician was there but I found out later was that it was a paediatric registrar and he had only been in the job for 3 weeks was very inexperienced and had never resuscitated a baby. They called another registrar but it took 15 minutes to find him and so during all that time she was not breathing. The notes showed that she had been in foetal distress for 30 minutes before the specialist arrived but my husband KNOWS that the midwife had not checked the baby’s heart beat for at least an hour and had retrospectively filled in the notes. (Also she got mine and the baby’s heartbeat muddled.) When they did finally get Rowan breathing I saw her and she was quite vigorous. But this all changed when the oxygen deprivation caused swelling in her brain and damage which led to fitting and all her vital organs shutting down.

Rowan was described by the paediatric nurses who cared for during numerous hospital stays throughout her 3 ½ years as being the most difficult baby to manage that they had encountered in 7 years. She constantly screamed in pain and was unable to suck or swallow her food so feeding her was like drowning her. We put the nasogastric tube down ourselves sometimes up to 6 times a day because she continuously vomited her milk and the tube back up. She had severe reflux that needed surgery. Her back arched so much she went backwards in to a C shape when she was lain down. She continuously got severe pneumonias and often choked on her own vomit.

Despite this she was full of personality and her smile would light up a room. We absolutely adored our dear daughter. The church was packed at her funeral because she made a huge impression on people.

Like Charley’s parents we were never contacted by the hospital regarding the birth. We were never questioned about what happened or asked if we were happy with the care we received. I struggled with crippling guilt as I felt that I had let my baby down. 7 years after she was born I miscarried which triggered terrible grief and so received some counselling for my intractable guilt from a midwife who specialized in similar cases. She was excellent and the guilt mainly dissipated but I remember going in to a very dark place. I still struggle with fatigue and sometimes I think that my nervous system has been permanently damaged by the continual emergencies which happened regularly.

—We weren’t informed of the diagnosis of spastic tetraplegia until Rowan was 8 months old when we received a copy of a letter from our paediatrician to another paediatrician detailing her condition. Up to this stage we had only been shown a diagram told that there were large gaps in the convolutions at the outside of her brain and that she would have a weakness down one side of her body.

–My obstetrician never visited me after the birth and at the 6 week check she dictated a letter very loudly in to a recorder stating that she had done everything correctly during the labour (all while I was getting dressed.)

- the midwife came to see me the day after Rowan was born. She said that next time I should NOT go privately but should go through the hospital system because the “team of the day” would be able to do an immediate C – section and there wouldn’t be any “hand over” delays. I never saw her again.

-Saturday is not a good day to have a baby

-I am very blessed to have had two normal deliveries since Rowan and have 2 gorgeous sons. My eldest is training to be a doctor and he recently helped to treat a birth asphyxiated baby by cooling it down. He is very compassionate and adored his sister.