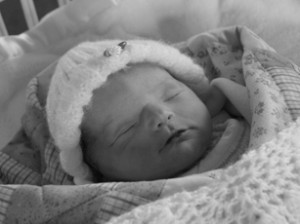 My wife Debra and I found out we were having a baby on our way back from the UK to settle in NZ after doing our “OE”, it was perfect timing and just what we wanted and we looked forward to Sarah’s birth with great anticipation. Deb’s pregnancy was textbook, we had a midwife as LMC and received good care from her throughout.

That was until the night of 21st of October last year, Deb was 34 weeks and had been having increasingly severe abdominal pain over the preceding couple of days. The pain eventually got too much for Deb to cope with and she was obviously not in Labour so we went to the A&E ward at the local hospital (Taranaki Base). They called our midwife for us (which we probably should have done ourselves) and she was transferred to the Pre-Labour ward where she was assessed by both our on call midwife and a Doctor, both of whom discussed her case with a specialist obstetrician and it was decided that Debra be admitted for observation overnight.

Debra collapsed at an unknown point in the night whilst attempting to go to the toilet and lay for an unknown amount of time unconscious before regaining consciousness, at which time she was only able to gain the attention of one of the ward midwives/nurses by yelling for quite some time. She had been left alone in a quiet end of the ward and not checked for a period of at least 4 and a half hours, probably longer. She lay unconscious on the floor for any amount of that time, we don’t know exactly how long she was left to lay there.

Once discovered and attended to Debra was presumed to have had a placental abruption and was therefore subsequently rushed to theatre for an emergency Caesarian Section where our Daughter Sarah was stillborn. It was discovered during the surgery that Debra had had a major abdominal Hemorrhage (not an abruption) that had caused her to collapse and eventually led to the death of Sarah, Deb nearly died as well, and lost an ovary during the operation. She had to have multiple blood transfusions to save her life.

If it had been known immediately or soon after that Deb had collapsed then it is likely we would have an 8 month old baby to hold and love right now. Sarah was a perfect and beautiful little girl, perfect in every way except perhaps the most important detail; she wasn’t breathing. She didn’t deserve to die and if not for the negligent care she and Deb received she probably would not have.