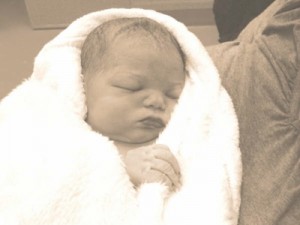 I am also one of the “Unlucky” mothers who suffered a tragedy under the care of a midwife.

We lost our precious girl Stevie on the 3rd of November.

Stevie was our first baby, and from the moment we found out I was pregnant we were overjoyed and wanted to do the utmost for the health and safety of our growing baby, following all the advice we were given and living a very healthy lifestyle.

Originally we had decided that we would labour and birth in hospital, feeling this was safest option, being in close proximity of medical help if we needed it. After a lot of consideration and conversation with our midwife, my husband and I made the decision that we would stay at home as long as we could during my labour, and as long as everything was going fine. In the event of anything unusual we were booked into a birthing unit and also at Wellington Women’s hospital. We felt safe.

We thought we were making the best decision for our baby.

We were told that in any sign of an emergency, we would be in the hospital within an hour if need be.

I was given a stretch and sweep on the Friday 31st Oct, as I was 10 days overdue.

I went into early labour on the Saturday morning 1st of Nov.

I had a brief conversation on the phone my midwife and she advised me this was the start of labour and could be a long time yet, she asked me to ring back when my contractions were closer.

My Husband phoned back a couple of times with some questions and concerns and was put through to a relief midwife whom we had never met, she informed us our midwife was out, but would be back in the early evening. She assured us everything was ok and normal.

My husband called back at a later time and spoke to our midwife requesting she come and check me.

Our midwife came to check me twice after this. Once at around 11 pm that night where she checked my dilation and informed me I still had “a ways to go yet “. She then checked our babies heartbeat a couple of times. One time I remember listening and saying oh that sounds fast, the midwife quickly replied that was normal during labour.

The midwife then went home for a quick sleep as she had been out that night.

That was the last time I heard my baby alive.

The next time our midwife came to check me was the next morning around 5 am My husband had to phone her, as we had expected her back hours earlier.

She proceeded to try and check babys’ heartbeat, which wasn’t found. All of my worst fears had come to life. Our baby had died during the night.

I was then driven to Hospital and birthed our Stevie, early on the Monday morning the 3rd of November. I cuddled her not believing what had happened.

I can’t begin to describe the feelings and grief we have and are suffering.

I went home from the hospital later that day. Without our baby.

We have not been contacted since in regards to Stevies Death.

We have never been questioned about what happened or if we were happy with the care we received.

Our midwife has been in contact several times for my postnatal checks.

She was also to relay the details of the mortality meeting that was held. Of which she could not remember most of the details.

I was so angered to find out the meeting that was reviewing our daughters’ death had already been and nobody had the courtesy to call us and let us know, or let us have our say or even listen to the facts and causes of her death. She was our baby we should have been informed.

It was found in the post mortem that our Stevie was a healthy baby who had gone into distress 2-3 days prior to her birth, she swallowed some of her meconium and developed pneumonia and died.

Our midwife informed us that we were unlucky and it was just one of those things.

She also informed us that she was found to not be at any fault.

If a healthy baby dies under her care, surely there is some fault there?

I am not out to discredit our midwife, but I feel we have been so terribly let down by the whole maternity system.

We had a perfectly healthy baby who in my opinion died due to lack of care.

I can never bring our baby girl back but I hope in some way her death was not for nothing. I am asking, calling to someone to review the maternity system and monitor it. So that these losses don’t keep happening.