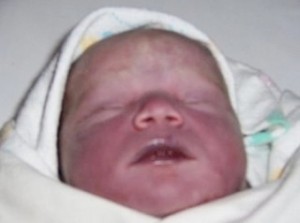 Tristan had a name before he was even conceived, and two older sisters.

My husband chose it for his firstborn son, and given my older two daughters’ names also begin with T it is perfect and fitting.

With my oldest I had the most wonderful midwife I could imagine, and with my younger daughter I had been under the obstetric team at the Hospital as because of medications I was on at the time of her conception the pregnancy was considered high risk.

I had no real complaints about the hospital team, but did miss the continuity my first midwife had given us, so when I discovered I was pregnant we went looking for a midwife.

At first I had a little difficulty finding a midwife who was prepared to take me on, partly because of location, and partly timing, but found one, attended the first appointment.

Just prior to my second appointment she contacted me to let me know she would not be able to take me on after all, but gave me a contact number for a midwife who could.

Pregnancy rolled on reasonably uneventfully, the midwife was friendly and chatty, but I was a little surprised as we entered the third trimester and the discussions I had had with my first midwife never occurred. Things like whether I’d want an injection to hurry up the placenta, vitamin K for baby etc.

In fact we actually never at any stage even discussed labour and/or delivery.

At around 38 weeks I noticed my discharge had become watery, and advised her, but she said it was quite normal.

At 41 weeks exactly on my scheduled appointment I was told by the midwife that she was going away the next day for the long weekend, and she made some mention of booking a post dates scan. I was somewhat put out that she had not advised me of her holiday plans earlier, but said little.

The following (Friday) morning I had a show, and contractions start.

I went into town to a friends place to spend the day.

They wound down about midday, only to do the same again on Saturday.

Sunday was more of the same, but with another set that night, and Monday also.

Tuesday morning the midwife was home, and I called her to give her to let her know where things were at, and told her I expected to be calling her later that day.

About 9:30 pm my contractions were less than 3 minutes apart and I arranged to meet her at the Hospital. After arrival at the delivery suite however things scaled back again, and we were sent home.

I told her I intended to go and crash on my friend’s sofa in town as my youngest daughter was staying there, and it was closer. She simply responded that once she got home and off to bed it would take her at least an hour and a half to get back by the time she got up, organised, and her “face on”.

I jokingly told her I didn’t care about the make-up as long as she was there to catch my baby, but was somewhat appalled.

Wednesday morning I phoned her and told her that I’d had enough, was exhausted, and that rupturing my membranes had worked previously to hurry up both my babies, and could she please do that today.

Once at the hospital however she could not get a “bulge” in the membranes in order to break them, and decided I should see an accupuncturist for moxibustion as he, like my previous girls, was posterior presentation.

I saw the accupuncturist that evening, and the following morning. The contractions after the second treatment were excruciating, but felt “wrong” for want of a better word.

The pain was like nothing else I have ever felt, but they felt like they were not actually doing anything much.

The midwife had a young teen in early pregnancy and her social worker with her, so when I called told me she was unavailable right then.

I called back about 30 minutes later but she was still busy, was rude and abrupt, and asked me what I expected her to do for me.

We picked up my daughter and dropped her with my friend, who was extremely concerned, and both she and my husband wanted to take me straight to hospital.

I argued that we should try going to the midwife’s rooms to see her first.

She was still with the young woman and her social worker, came out to the car grudgingly when my husband insisted, but told us she needed to finish up with her current client, and could meet us up at the hospital a little later in the afternoon.

My husband took me straight to delivery, and we asked them to take over.

It took them about 25 minutes to come and sort out foetal monitoring, but as soon as they did there were people rushing everywhere.

I was rushed in for an emergency C-section and awoke later in the afternoon to the news that my son was dead.

That day he was 42 weeks gestation and the midwife still had not organised a post-dates scan, or discussed birth with me.

There was no amniotic fluid left around my poor wee boy, he had pneumonia which had arisen from infection of the membranes, he was tiny, despite earlier signs he would be large like my daughter, as the placental development was not as it should be.

What finally killed him was asphyxia after placental abruption.

Had my midwife had a post-date scan done, as is recommended practice, I am sure he would have been delivered by C-section as soon as possible after the scan, due to the problems with the placenta and amniotic fluid.

If she had scheduled those scans my son would in all likelihood be almost one year old now.

The independent midwife review requested by the HDC found that her care had been reasonable, but that her notes were inadequate.

I understand she is undergoing some “additional education”. She continues to practice.